To share your memory on the wall of Rickey Cole, sign in using one of the following options:

Rickey Joe Cole, 64, passed away Thursday, December 17, 2020 at Christus St. Frances Cabrini Medical Center. He was an avid deer hunter. He loved spending time with his grandchildren, who were the light of his life. He was a life-long member of Longview Baptist Church. He worked and retired from Holsum Bakery in Alexandria.

Receive notifications about information and event scheduling for Rickey

We encourage you to share your most beloved memories of Rickey here, so that the family and other loved ones can always see it. You can upload cherished photographs, or share your favorite stories, and can even comment on those shared by others.

Posted Dec 20, 2020 at 03:49pm
I married into the family in 1981. Ricky and Karen were the first family I met, they made me feel part of the family from day one. I have many of fond memories of times shared through out the years. Rest well Ricky until we all meet again. May God bless and be with Karen and family during these difficult times. Prayers for all.
Comment Share
Share via:

Posted Dec 18, 2020 at 09:45am
Rickey has been more like a brother than an in law.
He always welcomed me and my family into his and my sister's home when we came to visit from Alabama and Ga.
We shared many memories of times I missed living away from home.
I remember being at his home during a Cole family function that I really felt like part of the family. Met some wonderful people from his side of the family. He always accepted me in spite of my short comings. He always had a smile and good, positive things to share.
I praise God for the love he has shown my dear sister.
He will be missed greatly.
I know that we will meet again at the throne of God.
Sleep easy Brother till we meet again.
Comment Share
Share via: 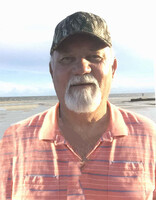