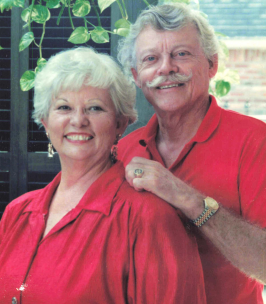 Shelby and Linda Bohannon, beloved parents, grandparents, friends, and champions of many passed from this life four months apart – Linda on August 16, 2021, and Shelby on Dec 16, 2021.

Their life was a grand adventure. An engineering graduate from Louisiana Tech University, Shelby married the love of his life, Linda Jean Westbrook on April 16, 1960. They began their 61 years together living in Natchez, Mississippi, then Baton Rouge before returning to their roots in Alexandria. Together the union produced two children, Vickie, and Shel.

In 1965 they launched their own consulting entomology and pest control company. In tandem, Shelby served as director of the Alexandria sanitation department working to improve waste management in the community. With their pest control company firmly established and under the guiding hand of Linda, Shelby tossed his hat into the legal arena earning his law degree in 1978.

It was a life lived to the fullest. Holidays were loved and celebrated - especially Christmas. Their house was the gathering place, and their annual party was a holly, jolly culinary event. Considering themselves blessed beyond words, they always opened their big hearts to help others. And they served their community with faith and devotion- Shelby as a Veterans Hospital legal assistant, member of the Masonic Lodge, and fund raiser for the Shriner’s Children’s Hospital, and Linda as Parliamentarian of the American Legion Ladies Auxiliary and a lifetime member. Shelby was a lieutenant in the US Air Force and he and Linda often frequented the local VFW. They participated in community celebrations, particularly Mardi Gras where Linda was a member of several krewes. She would meticulously wrap her “special beads” to present to her friends. She was quick to share her salty opinions with Letters to the Editor, and many friends loved searching for her opinionated treasures.
Through it all, inseparable and full of spirit, they had big fun. Their adventures took them on sea cruises, trips to exotic islands and historic countries, dancing across Louisiana, and on annual vacations to Las Vegas. La Tech held a special place in their hearts, and they were faithful members of the Bulldog nation. But perhaps their greatest fun was spending time at their second home in Orange Beach, Alabama. There they enjoyed early morning sunrises, watching dolphin frolic in the gulf, and making new friends at The American Legion in Gulf Shores. They cherished late evenings where they would watch the sun set on the surf while sipping their favorite beverages, Shelby’s cold beer, Linda’s signature rum and coke.

They leave to cherish their memory, their children and grandchildren, Vickie and John Owen and daughter Kasey, and Shel Bohannon and son Andrew. Also missing them are their feline companions, Big Boy and Spot who have now secured a place in Vickie’s home where they daily torment the other cats.
In keeping with their wishes, no formal service was held. Instead, family and friends attended an open house celebrating their life.

The loss is palatable. The comfort is knowing they are together - as it should be. We would like to recognize those who have been there for us during this unbearable heartache: Ms. Anna, Debbie, Brian, Gary, Glenn, Tommy, Dee, Margaret, both Bills, Ken, John, Julie, Becki, Deanna, Lanadia, Ruthie and especially Dana. All have given selflessly of their time, their love, and their support. Our gratitude goes out to those at the Pineville City Courthouse who truly kept Dad young; the Rapides Parish Clerk’s office whose respect and friendship made lawyering fun, and to the gang at their favorite watering hole, Top Shelf who were always quick with a laugh, a hug, and a smile. Thank you for embracing them and us.

“But a house that has done what a house should do, a house that has sheltered life, which has put its loving wooden arms around a man and wife…Yet it hurts me to look at the crumbling roof and the shutters fallen apart. For I cannot help thinking the poor old house is a house with a broken heart.”