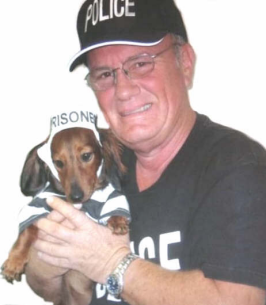 Services for Ricky Dale Parker will be at 11:30AM, Tuesday, July 26, 2022 at Sandy Lake Pentecostal Church, Jonesville, LA with Bro. Joel Ford officiating. Visitation will be from 10AM, Tuesday, July 26th until time of service at 11:30AM at the church. Interment will be at Wilbanks Cemetery, Jena, LA under the direction of Magnolia Funeral Home, Alexandria. Ricky Dale Parker was born in Jonesville, LA on August 30, 1958, and died peacefully at his home surrounded by his family on July 23, 2022. Ricky's work history began with 30 years in the oilfield. For seven years he served as a Catahoula Parish law enforcement officer. After serving our community, he began using his drilling experience by starting his water well business which he operated for 20 years. His success and expert ability in this industry are well known throughout our area. Ricky, with his multi-faceted sense of humor, had many talents. He was a licensed Extra Class Ham Operator, which is the highest attainable level. He was a collector of antique radios. He also had an extensive knowledge of and love for computers and any kind of electronics, which he gladly shared with everyone. Ricky is survived by his loving wife of 47 years, Camillia; his beautiful daughter, Frances Katrina; his precious mother, Wanda Parker; two loyal brothers, Bobby Parker and Stacy Parker; seven sisters-in-law; five brothers-in-law; a host of nieces and nephews, including great nieces and nephews, and a world of steadfast friends. Pallbearers are Elton Tolbert, Nick Parker, Stacy Parker, Kenny Davis, Dusty Johnson, and Michael Coates. Honorary pallbearers are Clifford Tolbert, Bill Tolbert, Cleveland Tolbert, and Calvin Tolbert.